Well! Can you tell I am 15 lbs. lighter than I was on October 1st? Do I write different? **correction I weigh in on Fridays...down another one!**
Well I guess I don't. I've continued on this diet plan since that day and it does make me feel better in all different ways. Clothes are becoming a bit of a problem. Before they were feeling snugggggy and now they are feeling loooooosey. At the end of the summer I bought a few new pairs of pants but now they don't look so great. They are no longer being held up by the same tummy and bum and therefore they are loose and suddenly too long! I hate to think I might have shrunk in height with this diet...hmmmm....
Because I'm not done yet I've been holding off buying new clothes. I think I'll try to alter the new pants....or put them aside because most likely I'll fit in them again some day. Thats not in the plan though so so I did a bit of shopping tonight.

AND I have a recipe to share with you. On the weekend we were at a chicken bbq and someone made this soup. It was so yummy I naturally had to come away with the recipe. I changed it slightly by replacing a pound of bacon with ham. Its a lighter version.
I ate it in my favourite Mushroom Soup bowl. I'm sure its perfectly fine to do that. :o) 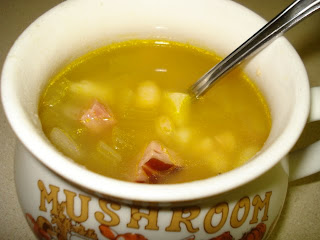 Bean and Bacon or my version Bean and Ham Soup
1 pound of bacon (sliced) and lightly fried // I had purchased one of those smaller hunks of Ham it was Maple flavour and used about 1/2 of it but into smaller chunks
4 stalks celery (diced)
2 carrots - (sliced)
1 onion (diced)
3 cloves garlic
1 carton of Campbells Vegetable Broth
1 small package of dried Navy Beans (I used Northern Beans) prepare as instructions on package - which is simply soaking them covered in water for 24 hours
Salt to taste
Pepper to taste
Onion Powder to taste
Parsley to taste
In a larger size pan saute the celery, onion, carrots and garlic in olive oil lightly and then add the ham and saute for about 10 minutes longer. 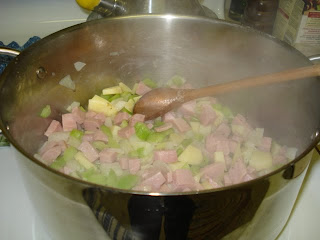 Add the Veggie broth and 2 cups of water and the spices. Cover and cook for about 1.5-2 hours or until the beans are done, stirring here and there. You don't want them to be mush done but done. Thats it! Serve with crackers or as the lady who makes this soup said they serve it with a grilled cheese sandwich.
She sometimes add a can of black beans also.
Enjoy it one cold winter night.
Have a lovely day... Judi xoxo
at November 19, 2009
Email ThisBlogThis!Share to TwitterShare to FacebookShare to Pinterest
Labels: bacon and bean soup, recipes

Oooh, that is my hubby's favorite soup but I'm not too fond of it. I think if I told him you've made some he'd flit on over and just leave me here, sugar! LOL But he loves it.
xoxo,
Connie

Yum Judi that sounds sooooo good! And loosey is better than snuggy :D I just love that mushroom soup bowl! It's so cute ♥

Congrats on your weight loss, that is wonderful :-) It just does something for you when your clothes are too baggy and you have to buy a smaller size--I think it puts a spring in your step and a smile on your face. It did for me recently when I had to buy smaller jeans :-)

Have a great weekend!

Your soup recipe sounds delicious! Congratulations on your weight loss, sounds like you are doing a GREAT job with it. I would much rather clothes be loose than to tight!

Hi Judi! Oh, I hardly noticed you you've lost so much weight! Congratulations to you, it's so hard to loose weight.
Now that soup looks and sounds so good. I think I would rather have the ham in it too.
Take care sweet friend and don't loose too much weight or the wind will just blow you away!
Be a sweetie,
Shelia ;)

Congrats on the weight loss, that's quite an achievement! I love Toronto, I was there once in the summer and thought it was a glorious city! I am sure we have very similar weather and I do enjoy the 50's in Nov. but I still want a white Christmas! Cindy

Yea, Judi! Good for you! I'm so proud of you. And that soup looks delicious. Thanks for the recipe.

Hi Judi, I love bean soup when the weather gets cold. I always put ham in mine too.

Congratulations on losing 16 pounds, that's a big accomplishment. I find it a constant struggle at this stage of life. My carefree days of eating whatever I wanted are gone for good!

Congratulations on your weight loss!

I will be right over for lunch, that soup looks so yummy!
Hugs
Patti