Just About Me and Mac and Cheese

Do you have those kinds of days when at the end all you can do is roll your eyes and shrug your shoulders? 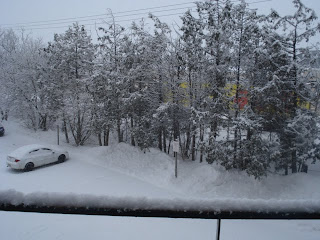 (thats my little car out there. We hadn't had this kind of weather this winter. This was before it really got going)

Not a problem I would make mac and cheese and hot dogs on Friday when Marc got home from out of town. The weather on Friday turned nasty. We decided he better wait until the next morning, Saturday, to make the drive. Meanwhile Geoff emailed me on the Friday and said they could come over after Madeline had been to a birthday party. So I made the mac and cheese after work on Friday and got things ready
. 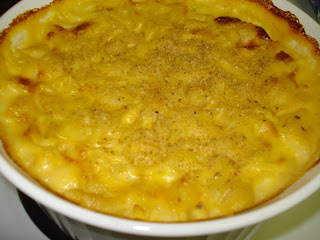 So who WAS going to eat all this mac and cheese with me? Fortunately Geoff called later that Saturday afternoon and said they could come over after the party. Oh good... I had macaroni and cheese...and the Mac and Cheese Recipe made lots!!

If you make this recipe make sure you don't have to eat it all alone.... Judi xoxo
at March 08, 2010
Email ThisBlogThis!Share to TwitterShare to FacebookShare to Pinterest
Labels: macaroni and cheese recipe, shrug story

Oh, I could live off mac and cheese for days.

My strange family and I eat it with homemade ranch dressing, the buttermilk style. Kinda like fries and ketchup. Its good, seriously;-)

Cute story. I could eat the whole recipe by myself though. Ha I've been put on salt. Can you believe that? I haven't eaten salt for 40 years. My bloodpressure is very low and this is suppose to help. I now hate the taste of it but it is easily hidden. Hope you have a good day. Wish I had some mac and cheese. M

YUMMY! I will go get that recipe...looks delicious:) Enjoy your day my friend. Hope Springtime will appear for you soon! Hugs from Georgia!

Oh Judi that is too funny. I LOVE mac and cheese and that recipe looks delicious! I have already printed it out to try. I could EASILY eat the whole thing by myself!

Look at all of your snow!!! WOW!! Hope you are having a great day.♥

So funny Judi! I'm glad you finally got to eat your Mac n Cheese! Looks yummy....is there any left?
xoxo,
Kim

Hi Judi,
Oh dear, what a week you've had with your Mac and Cheese. oh too funny!
Hugs,
Anna

Boy all that snow, hope it has gone by now. We have had gorgeous sunny weather this week but it is going to rain in the next couple of days. Your Mac and cheese looks yummy.

Yummy...gives me an idea for dinner!
LOVE your blue mosaic plate and the sweet saying on it!
Warmly,
Deb :)

It looks so good! I love macaroni and cheese...I would come help you eat it!

It looks so good, Judi, that I probably could eat it all!

Hi Judi
You won't want any more for a few weeks! Sorry your plans kept going wrong but it made a funny story.
I love your finished mosaic. It looks so pretty.
Best Wishes
Lindsay
x