The seafood we enjoyed while on our California vacation was absolutely delicious. It was so fresh and so tasty and mmmmmmhmmmm...yum! 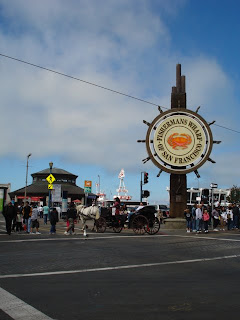 In San Francisco at the Fisherman's Wharf we couldn't get over the lovely looking seafood prepared in the open on Pier 39. There were aisles and counters of all kinds..... 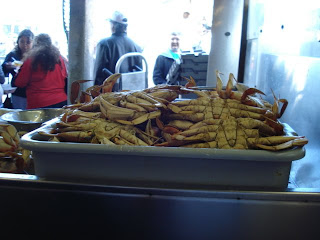 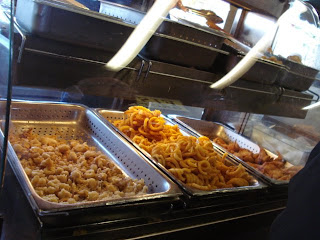 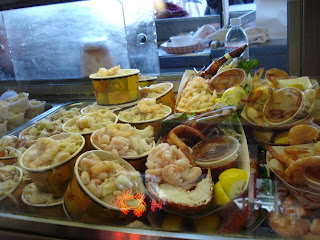 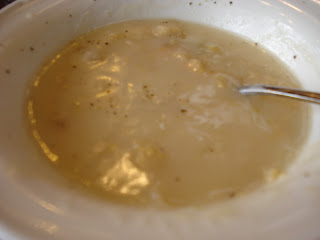 So when we saw the wonderful bread they 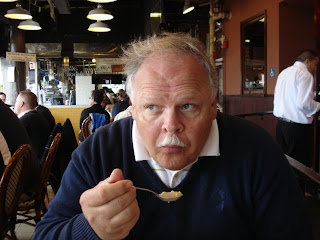 brought to us we passed on the bread bowl and ordered ours in a regular bowl. Here Marc is enjoying his soup while we were on vacation. He has a bit of a windblown look. It was a windy day. *s*. 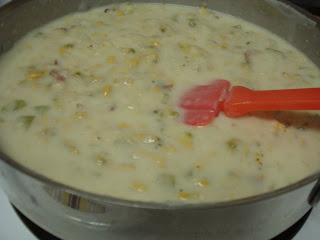 Since coming home a week ago Friday I've made clam chowder twice. Once for Geoff and I and the other time last night when Janet came over for dinner. Marc was at work so I made it without telling him. It was a nice surprise for him and he said it was yummy. I forgot to take pictures while I was making it but here it is all all complete. The recipe I used is below.
Clam Chowder Recipe
2 6.5 oz cans of baby clams, drained (keep the liquid aside)
1 small bottle clam juice
3 medium potates, peels and chopped
1/2 cup chopped onion
1 stalk celery, sliced thin
2 slices bacon
2 tablespoons flour
2 cups milk (I've used 1% and 2% and both worked great)
1/2 cup half and half cream
1/2 tsp pepper (or to taste)
1/3 tsp dried thyme
In a large sauce pan fry the bacon until its crispy. Place on paper towel to absorb grease and then crunch it and place in separate little container.
Drain bacon grease from pan except for 1 tablespoon. Add the onions, celery, potatoes, thyme, pepper and the bottle of clam juice. Stir and bring that to a boil, lower temperature and cover cooking the potatoes until they are done. Stir periodically. Mash most of the potatoes with a spoon against the wall of the saucepan.
In a large measuring cup add the milk, cream and flour and stir to mix. Slowly add that to the mixture in the saucepan. Stir until it has thickened. Add the clams and stir for a few minutes until it has heated throughout. I additionally added some of the drained liquid from the clams for added taste. Easy isn't it? And it IS very yummy. mmmmm....
Serve in cup or bowl and sprinkle crumbled bacon into each cup. Enjoy......
Have a lovely day... Judi xoxo
at August 08, 2009
Email ThisBlogThis!Share to TwitterShare to FacebookShare to Pinterest
Labels: San Francisco, seafood recipe, vacation days

Yummy!! Wow it looks wonderful. And, I love sourdough bread. Don't eat it often, but do love it.

Evening, Judi! Oh, I love Fisherman's Wharf! I've been right there! Yum, the chowder sounds delish! Did you make me some? :)
Be a sweetie,
shelia ;)

Oh Judi I am so glad you had a great time in my State...I love Frisco always so much food and fun..and Yes they do have the best Sour Dough Bread...did you get a starter kit while you were there...I had one that lasted over 5 years so I could make it at home YUMMY!! May you have a great weekend my friend...Hugs and smiles Gl♥ria

Glad you had a good vacation. I love San Francisco!

I pushed your "Web Page" button and that is how I got to the word press I guess.

Anyway thanks for telling me. I see you had a good time in SF. My husband went clamming with our neighbor and brought back enough clams to make a big pot of chowder. I froze more than half of it. I don't care for fish but he loves it.

Have a great weekend!
Hugs
Patti

I just love sour dough bread!!! It all looks so delicious!!! Lucky you!

Hi Judi--San Francisco is such a neat city! The chowder does sound fabulous, and I agree that the sourdough bread is wonderful there. I'm so glad you had such a great vacation.

Hi Judi, your vacation sounds wonderful. I would love to visit that fish market. Mmmmmmm. Your recipe is so easy and my hubby loves it. I will try this recipe for sure. I have been in San Fran and it is beautiful there. My niece was married there as well. I love the cool weather.

Thanks for your visit.

Thanks for stopping by! Leave out the clams and the juice and I could probably eat that chowder,gues it would be like potato soup. The wharf looks like it has lot of things to eat there.

Now if there wss just some way to re-create that sourdough bread at home!!! I want to go get a few loaves now...I have heard you can order it from a San Fran bakery though.....hmmmmm.......