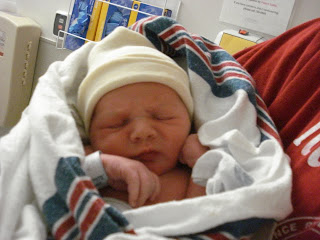 Marc's daughter Janet surprised us all when she announced on her 30th surprise birthday party in February that they were pregnant! Jack was going to be a big brother. At that time I posted they were having twins however Janet lost the other baby early on without knowing it. Hearing all good news during the rest of the pregnancy was very exciting.

Reed Christopher was born yesterday morning by scheduled C-section. He is beautiful weighing in at 9 lb. Big brother Jack isn't quite sure what to make of the whole idea now that the brother is on "this" side. *s*.. Janet is feeling great and so is dad and Grandpa Marc is very proud.

New baby news is such happy news....I hope you have a happy day too...Judi xoxo

That IS happy news!! Congratulations to all. What a fun time. Good luck on that quilt, it is going to be beautiful and Reed will love it.

Congratulation ,what a darling baby .

Oh he's beautiful Judi! Congratulations to all of you!!

Congrats to you girl..He's so freaking cute and a big boy at 9 lbs...Hope you have a GREAT day my friend...Hugs and smiles Gl♥ria

Oh, congratulations, Judi! Little Reed is adorable! He is a big little guy! Hope little mama is doing well and he'll be so cute wrapped up in his blanket you've made!
Be a sweetie,
shelia ;)

Congrats Judi!! Good luck with the quilt! And I am sure you will have lots of fun with the new little one. He is so cute! We just had a new great-nephew born last Saturday the 16th. Our granddaughter is due to arrive around Nov 22. My daughter-in-law is getting uncomfortably big now. She can't wait. We are looking forward to visiting them in December!

Hi Judi
Congratulations. He is such a beautiful baby.
Lindsay
x

Congrats! He is a little cutie :-)

Awwwww he is so beautiful. Congratulations to everyone!!♥

Hi Judi, what a handsome baby boy "Reed" is... congrats to everyone..have a fun time loving on this precious gift from God..hugs, Baba