While in SanFrancisco on our vacation we visited Alcatraz. We purchased our tickets online a couple of weeks earlier as suggested to us. Good thing because it was all sold out for that day. We took a short ferry ride to the island. 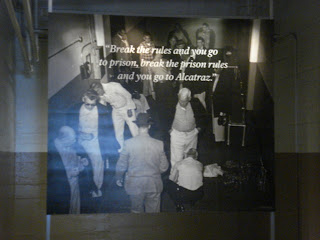 Looking back on to land from Alcatraz I was reminded how close it was to land. So close but yet to the prisoners so very far. The water temperatures are in the 50s so you wouldn't survive too long swimming in it, there were a lot of currents to pull you under and of course there are sharks. I could only imagine how they would have felt looking back at the land. They were destined to be there forever.... 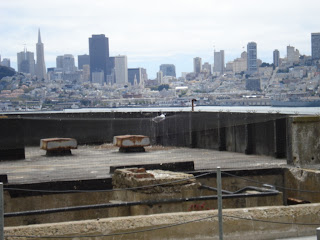 It was quite a walk outdoors up to the actual prison. The buildings were quite oldlike and worn and in shambles. 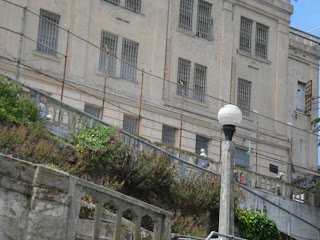 We did pass some beautiful flowers growing along the way along the hike up. 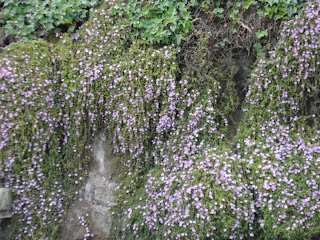 We chose the audio tour. We were given headphones and a little recorder. Once we stepped inside the actual prison we turned it on and followed the route it directed us to. 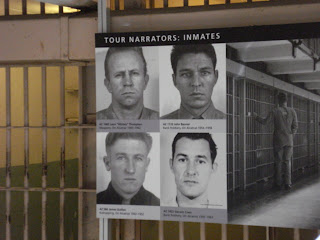 Some of the narrators were the voices of these inmates. As we moved along the corridors which were named "Broadway Avenue'' etc. we were directed to stop at certain spots. We were told stories of the particular cells, or rooms or kitchen or corridor by them. We could hear heavy doors slamming in our ears. 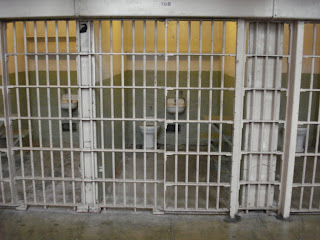 Doors to cells like the ones above. In this area they were not allowed to put up anything on the walls or floors. No pictures, no rugs...nothing. There were some other areas perhaps some of the inmates had worked their way up to them. They were allowed to paint and hung their pictures. Or they read books and had them on shelves. It felt very creepy to know that some of them had been told that no one knew they were alive. Friends and relatives had been told they were dead. 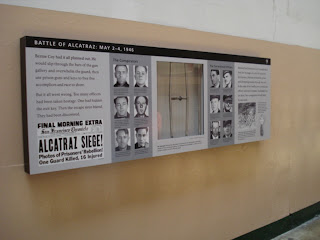 There was a siege in the prison from May 2-4, 1946. There had been a lot of planning and chances taken but it didn't go so well. In the above picture some of the inmates are shown in the left pictures and officers on the right. Some of the officers were taken hostage and in the fight were shot. Three prisoners did make it to the water and were never seen again. Could they have been sooo lucky to have made it. No one knows.
The prison was closed in the 60s and the prisoners were taken to other prisons because it was becoming too rundown and expensive to repair.
We were standing there smiling. We were happy and going back home...or at least to tour some more of lovely SanFrancisco. 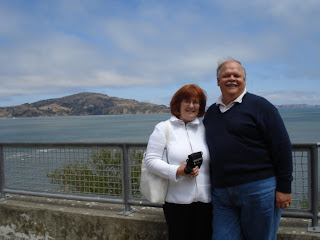 I hope you are enjoying your day too.... Judi xoxo
at August 12, 2009
Email ThisBlogThis!Share to TwitterShare to FacebookShare to Pinterest
Labels: Alcatraz, San Francisco, vacation days

I saw a special about how they brought in gardeners to try and make the gardens there back to the original plants and flowers....did they talk at all about that??? I am looking foraward to seeing the gardens there ones of these years!

Love the title--I got a good laugh. Alcatraz is really something and I had no idea that some of the narration was from actual prisoners. Very interesting. Thanks for sharing.

We toured Alcatraz when we lived in California. I thought it was so neat but I can't even imagine being imprisoned there.

Hi Judi,
Lovely to read and see your photos about your trip to Alcatraz.
My DH went there five years ago but got a migraine and was not very enthusiastic about the trip.
Hugs,
Anna

Thanks Judi for sharing your trip. I have never been there but I'm sure it would be kind of spooky and can't imagine what the prisoners who were there felt. But of course they got there because of something they had done, but I still feel bad for them.